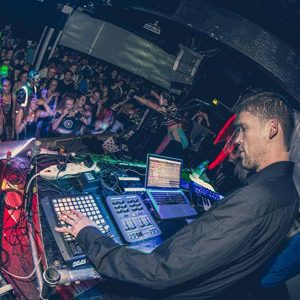 Exposed to a wide range of music from a young age, E-coli became involved in the local free party scene by the time he was 18. Before long he was organising large parties as a member of Jigsore Soundsystem and performing his unique mash-up sets to increasingly growing crowds.

E-Coli has been a supporter of Amen4Tekno over the last few years providing a platform for the label to grow through various bookings. He is an educated promoter and a leading man for the amazing Balter Festival based in Wales. Widely known for playing and producing crazy Gypsycore and Breakcore he is the number one go to see DJ for a crazy outlandish Balkan swing infused set.

More recently E-Coli’s sound has merged into a very dance floor Gypsetek sound. Incorporating some huge European Hardtek bangers  as well as the sounds of Amen4Tekno. So what better time to welcome him in to our crazy crew of producers than now.