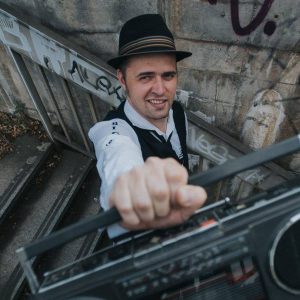 Producer, musician and DJ MikkiM is a true pioneer and talent in combining a great range of musical styles. His energetic music, uncompromising pumping DJ sets and live shows are making people go crazy all over the world. Musically projecting vibes of reggae and jungle including hard tekno music inspired by the freetekno scene.

MikkiM first became part of the Amen4Tekno team with the amazing track Vibes Rising ft Ras Zacharri. Crew member C3B remixed the track into a pumping Raggatek anthem which was then released on Amen4Tekno 002 Vinyl in 2014.

Since then MikkiM has been working closely with various artists within the label fabricating some great collaborations and remixes out of his Prague based studio. Working on completely original tracks with the lead vocalist from Ting an American Dub Ragga outfit there is a lot more to come from this man in the future.

MikkiM is an amazing DJ and we are proud to be working with such a prolific producer in the world of underground music in the UK and Europe.